My office window looks out at the Statue of Liberty.

On this day, the sun is out after being shrouded for weeks by clouds gifting snow and rain. The water and sky beam a gentle blue. Elliott Bay, the body of water at the base of lady liberty is perfectly calm and I have a desire to float atop the flat surface and look up at that tranquil sky while I try…to calm…my hysteria.

You see on Alki Point, in Seattle, there is a replica of the Statue of Liberty. She is much smaller than the original…six feet to New York Harbor’s three hundred and five. She has been referred to as a little sister to her east coast sibling.  In times of crisis, people gather around her, lighting candles at her feet. Shouldn’t that be every day right now?

If it was warm out, I’d like to lay at those feet, the bricks below me warming my body. I am so mentally spent that I would cradle my head in my hands and simply sob – pouring out in tears everything that feels at risk…reproductive rights, civil rights, respect, decency.

My salty tears would roll down my face and drop onto her feet, creating freckled shadows that would slowly fade as it seeped beneath her surface. I would like to believe that this could trigger her to life. That she could rise up, growing from her scant six feet to full size, and take a graceful but powerful step forward from west coast to east, from this Washington to that. 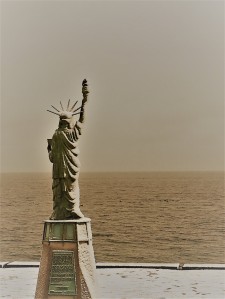 I’d like to believe she could stand in front of the White House, then slowly kneeling, peer through the windows of the Oval Office, her stern knowing face sending a message. Could she reach in with a gentle hand? Could she take him between her fingers, drawing him out as he was finally too shocked to speak? Imagine the beautiful silence. No blame cast, no executive orders signed, no glance the other way as the acceptance of racism accelerates.

She would drop him into one of the many creases of her robe – like a crevasse on a glacier, where he would fall so far down into the dark, that no sound from within would reach outside and only a deafening silence would surround him inside. There he would be left with only his own thoughts and no audience to provide the attention he requires to breath, to live, to maintain sanity because what he has gifted us, this insanity, we return to him. Whether he would benefit and grow from this reflection, we would never know because his actions require a life sentence.

Rising up, the little sister would lightly pull up the folds of her skirt just enough so she could step forward and start north to New York. And when she reached the harbor, she would grasp hands with her big sister and they would hold their arms victoriously over their heads while a crescendo of elation would ripple across the U.S., from east to west, back to Seattle, where I lay on Alki Point at the base which once held her, gaining back my strength.

One Reply to “Little Sister”