Learning How to Spell Fascism

I didn’t see him approach. My head was turned in the opposite direction, my neck craning to see Alicia Keys on the jumbo-tron. Two trees, a building corner and a half million people stood between me and where Alicia spoke on stage. 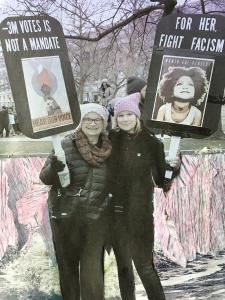 I was cold from standing still, wishing my fingerless gloves had fingers. My protest sign was tucked under one arm, its cardboard stem resting against the ground.

I felt the vibration of his finger tapping on my sign before I heard him ask, “What do you think this means?”

Turning, I saw a barrel-chested man of short stature.

He wore a full beard, a worn leather jacket and a black scarf knotted around his neck. With his dark hair tinged gray, peeking out of a beret, he brought to mind Che Guevara, had Che lived past 39 years of age to become a portly, retired revolutionary.

He did not ask his question with malice but I knew it was rhetorical, entry to a conversation where my answers would demonstrate my lack of knowledge and he would have the opportunity to lecture me, at a women’s march no less, on the finer points of political systems. Even in the chilled air, I could smell his mustiness, imagining he’d spent the morning sitting in an armchair of a shadowy apartment surrounded by piles of books espousing romantic nationalism.

I was in DC with my mother, who at 69 years shares her age with Hillary Clinton.

We had flown from Seattle to participate in the Women’s March on Washington. Having arrived the day before the presidential inauguration, I was cautious in identifying friend or foe as the color red, and particularly in ball cap form, had taken on a sinister tone. Seeing our knitted pink hats, many women approached us, to say hello, to give a hug, to express their appreciation. As few of them wore the requisite cat-eared topper, I stayed stiff and suspicious until they made clear we were on the same team. My mother, however, does not face the world with the same armor I carry – she faces it with an open face, bright blue eyes and a wide smile – and she was quick to reciprocate their greetings.

She came of age in the 60s and embraced the hippie culture, which included protesting the establishment. I was expected to participate from an early age on, starting with signs and chants of “no nukes” in grade school. In our household, where we listened to NPR’s All Things Considered each night, had no TV, ate vegetables from the garden, and abstained from meat, I was being raised to balance liberal outrage with compassion for others.

Now here we were in our nation’s capital, preparing to march together again but the first time as adults.

With city streets barricaded for the inauguration, we walked more miles than planned. I am an unusually quick walker – she is painfully slow. We acknowledged our paces were not aligned and that we would need to be patient with each other. She recounted a recent visit to my grandmother in Arizona, and the slow motion shuffle her 89-year-old mother has decelerated to. I envisioned the three of us walking in a line illustrating the physical evolution of woman through our gaits.

The day before the march was that kind of damp colorless day a mild winter brings. We walked to the Vietnam Memorial, where we looked up three of my mother’s high school classmates amidst the over 58,000 names inscribed on the wall. Pink pussy hats and red ball caps stood bright against the dull day, the wall reflecting our images back. This was the one place where neither party cast suspicion or a curious glance at the other. Each instead taking a private internal journey of grief and remembrance. My mother’s eyes filled with tears behind her glasses, which were quickly fogging up. As a young adult, she was raising children and watching her peers die. At the same age, I was chasing a career with no societal expectations around being selfish or selfless.

In preparation for the march, we spent too much time creating the perfect protest sign.

I was sure there would be a run on poster board in DC so even before arriving there was much texting back and forth on how to transport the materials with which to make our statement and still avoid checking luggage.

My mother first created a large cloth sign with poles on each side that could be rolled up to meet in the center for easy transport. The sign’s flaws included the necessity to hold it up with two hands for a five-plus hour march, and the fact that her letters had been stenciled on so large that instead of saying “No Mandate” on one or two lines, it took three lines to say:

She texted a picture of my stepfather modeling the sign and my husband and I doubled over in laughter.

Once in DC, we sat in our basement Airbnb apartment in the NOMA neighborhood, watching the inauguration on TV as we shook our heads in disbelief and made our signs. Mine had included Jessica Sabogal’s art of young girl with a ring of natural afro textured hair around her heart shaped face, her eyes shining up in hope. I affixed letters above her that read “For Her, Fight Facism.”

Mom’s was a visual of multi-racial hands holding a torch and dove, another piece of art by Ms. Sabogal. Above the art, mom wrote “-3M Votes is Not a Mandate.”

Now here we were at the march as an aged revolutionary tapped on the word Facism on my sign.

I didn’t feel threatened – his short stature helped – and at first I engaged. It had been a long time since my college readings of Karl Mark, Alexis De Tocqueville, or Machiavelli and I was reaching back into my unreliable memory for naught. My intellect letting me down. It was clear this man lived and breathed the philosophical discussion he wanted to have. While I was watching “The Bachelor,” he was reading Ayn Rand.

He explained that having lived in Russia and Ukraine, Americans didn’t have any idea what fascism was. And that often western progressives extol the virtues of socialism when it’s simply an “ism” away from fascism. Using Mussolini and Stalin as examples, he shared that we tend to think of these individuals as dictators and cast them as evil, but our western view simplifies the socialist underpinnings of their rhetoric.

When my mother joined the discussion, I tossed the conversation for her to catch with a subtle turn away.

In the background, I could hear my mother’s calm, warm voice inviting and progressing the discourse and they went on this way through the next speaker. But I snapped to attention when the words “Clinton,” “foster children,” “sexual predators” were volleyed at her. The conversation had switched tracks from a political system discussion to conspiracy theories. My mother extricated herself aptly. She said emphatically “what you are saying is not true.” And then she smiled, saying they would have to agree to disagree and although she enjoyed speaking with him, it was time to return her focus to the speeches. She asked to shake his hand and thanked him for the discussion. Two weathered hands met, he thanked her in return and walked away.

“What did he say about the children?” I asked. She just shook her head. Two women next to us expressed their admiration for our indulgence of the discussion. Apparently, he had approached them first and they simply ignored him. My mother seemed surprised by the compliments, “How else will we resolve our differences if we don’t talk?” she asked. Later over dinner she said it was important to “dig deep to connect and find common ground.”

…the first “s” inadvertently dropped during that basement sign making session full of political distraction. My mother claims she didn’t notice. That we see what we want to see.

2 Replies to “Learning How to Spell Fascism”